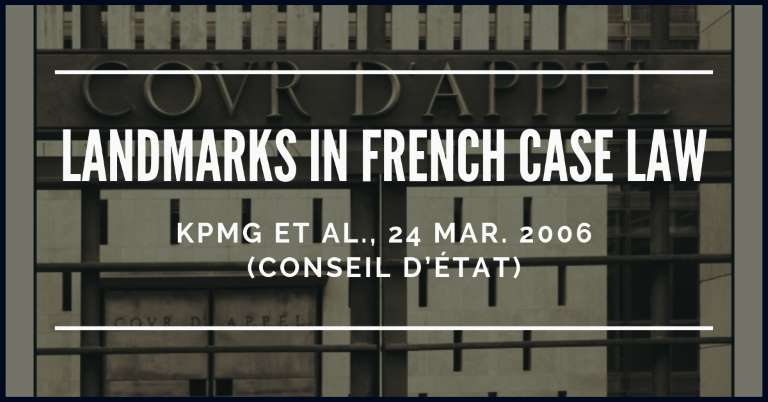 For foreign legal professionals and translators, understanding a country’s case law can provide valuable insight into the broader legal context.

And despite a common misconception in common-law countries, much of France’s legal system is also founded on judge-made law, making case law an essential field.

In a series of posts, I will give a brief overview of some of the cases that have shaped modern French case law and made France’s legal system what it is.

This time around, I will look at a leading case from the Council of State (Conseil d’État), France’s highest administrative court: KPMG, Ernst Young et al. (24 March 2006).

In the wake of the financial scandals of the early 2000s (including the Enron case), France moved to enact more stringent financial oversight legislation with the 2003 Financial Security Act (Loi de sécurité financière, or LSF).

This law was responsible for the creation of France’s financial markets watchdog, the AMF (Autorité des Marchés Financiers), but in addition, it instituted new ethical requirements for statutory auditors, including the mandatory separation of statutory auditing and financial consulting activities.

In accordance with this new legislation, a code of ethics for statutory auditors was finally approved by decree in 2005, officially implementing the remaining provisions of the LSF on statutory auditors and making auditing firms subject to penalties for non-compliance with the ethical rules.

Taking opposition to the decree, five large accounting firms with activities in France challenged it before the Council of State.

The petitioners challenged a number of points in the new law, but the essential legal question of the case—and the reason it is today considered to be a landmark judgment—centered around the “immediate entry into force” of the decree.

While France does have a legal principle roughly stating that “no one has the right for existing regulations to remain in force”—regardless of whether the regulations in question specifically provide that they will remain in effect for a predetermined period—the petitioners claimed that the Government had acted ultra vires in giving immediate effect to the new code of ethics.

This, they argued, effectively made it retroactive with regard to existing contractual relationships. Under previously applicable regulations, accounting firms were legally authorized to simultaneously provide companies with both statutory auditing services and other consulting services, and the contracts in place with the firms they worked for reflected this.

From one day to the next, this was no longer possible, and firms risked sanctions if they failed to immediately comply with the new ethical requirements.

In light of these circumstances, the petitioners asked the Council of State to strike down the decree.

Under French case law, provisions that apply to existing contracts are effectively considered to be retroactive.

However, the courts have held that Parliament can apply laws to existing contracts when the general interest requires it, and the security and transparency of the financial system fall sufficiently within this category so as to constitute an exception.

Yet the executive does not have the same latitude as Parliament to institute retroactive measures, and it was the decree itself that had created the retroactive requirements in its provisions specifying how the LSF was to apply.

Consequently, it was the decree that was the target of the petitioners’ challenges.

While all of the petitioners’ other claims were rejected, their claim regarding the immediate effect of the decree was viewed favorably by the court.

Yet the court did not simply prohibit the retroactivity of administrative measures (already an existing principle in France). Rather, it instituted a new general principle in French public law: legal certainty.

Already long established in EU case law, legal certainty is defined by the ECJ as a principle requiring “that rules of law be clear, precise and predictable as regards their effects, in particular where they may have unfavourable consequences for individuals and undertakings”. [Criminal proceedings against Costa (C-72/10) EU:C:2012:80, point 74]

In KPMG, the Council of State brought this principle to bear in national administrative law, making it applicable to executive regulations.

It held that, while there were sound public policy reasons for the LSF and its associated code of ethics to apply to existing contractual relationships, the fact that accounting firms incurred penalties for previously legal combinations of activities without being given a transitional period to comply meant that the measures caused “disturbances” to lawful contractual relationships that were, “in light of their excessive nature with regard to the aims being pursued, in violation of the principle of legal certainty”.

In sum, the petitioners could not have foreseen that, in the perfectly lawful exercise of their business activities, a government measure would suddenly disrupt their existing contractual relationships with their customers and subject them to penalties.

France’s highest administrative court therefore created the rule, in KPMG, that in some circumstances—particularly when government regulations are likely to cause harm to existing contractual relationships—the Government must provide for transitional measures in order to ensure that the principle of “legal certainty” is upheld.

(To view the original judgment in French, click here.)

Thoughts on the article? Questions on the specifics? Cases to suggest for future articles? I’d love to hear them! Leave a comment, discuss the topic with me on Twitter (@ceddytrad) or LinkedIn, and be sure to share the article with friends and colleagues who might be interested!

In the market for legal translation services?

Looking for a French-English translation specialist to translate your legal documents? Look no further. Contact me today for a free quote.