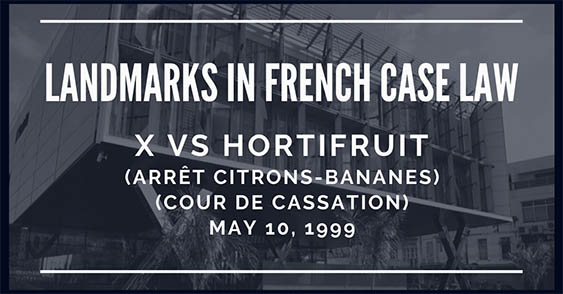 For foreign legal professionals and translators, understanding a country’s case law can provide valuable insight into the broader legal context.

And despite a common misconception in common-law countries, much of France’s legal system is also founded on judge-made law, making case law an essential area of study.

In a series of posts, I showcase some of the rulings that have shaped modern French case law and made France’s legal system what it is.

This time around, I will look at a landmark case from France’s highest judicial court, the Cour de Cassation: X vs. Hortifruit (colorfully referred to as the Arrêt Citrons-Bananes, or “Lemons and Bananas Ruling”), handed down on May 10, 1999 (Cour de Cassation, Labor and Employment Division, Case no. 96-45.673: available here).

The case begins with a plantation worker, Ms. X, who harvested lemons for a living.

She had worked for Hortifruit, her employer, for over a decade in the exact same job, when one day—although the exact circumstances are unclear—the company decided to reassign her from lemon picking to banana bagging.

Indignant, Ms. X refused to return to work, claiming the move was no more than a concealed form of punishment inflicted on her by her employer.

Citing her refusal to work, the company terminated her for cause.

2. The Initial Court of Appeal’s Ruling

In its judgment, the Court of Appeal of Fort-de-France (Martinique) explained that under French law, companies can reassign workers to another position:

Such a change in position, the court said, is not deemed a substantial modification to the employment contract only so long as the employee’s circumstances remain the same in terms of title, wages, working hours, and workplace.

In this case, however, the appeals judges found that being reassigned to bagging bananas—a task Ms. X had never before been asked to perform—markedly altered the circumstances of her employment and resulted in a substantial modification to the terms of her employment contract.

The court therefore found that by refusing to work, she had not engaged in misconduct sufficient to constitute grounds for termination for cause.

She was awarded compensation in lieu of notice, severance compensation, and damages for wrongful termination.

Hortifruit appealed the decision before the court of last resort, the Cour de Cassation, which did not draw the same conclusions as the court below.

Curiously, the legal basis for the Cour de Cassation’s decision was rooted in Article 1134 of the French Civil Code (today found—with only slight modifications from the 2016 contract law reform—in Articles 1103, 1104 and 1193 of the Civil Code):

The court’s ruling is short and gives precious little detail as to the legal justification that underpins it.

The conclusion reached by commentators is that the court judged that Ms. X had failed to meet her obligation of good faith in contractual dealings—each party being bound by a duty to comply with all contractual obligations that are not abusive or unlawful.

In a ruling that has had a significant impact on French employment law, the court held that, generally speaking, modifying working conditions—and specifically the tasks carried out by employees—is within the scope of employers’ managerial authority, and that as such, no substantial modification to the employee’s contract is made so long as the reassignment corresponds to the employee’s title.

Ms. X’s title was an agricultural worker, and as such, the court’s view was that a change in working conditions did not necessarily equate to a fundamental change in her employment contract.

In light of this, the Cour de Cassation vacated the judgment and remanded it the Court of Appeal of Fort-de-France for a new hearing by a different panel consistent with its ruling.

(To view the original judgment in French, click here.)

Thoughts or questions on the article? Cases to suggest for future articles? I’d love to hear them! Leave a comment, discuss the topic with me on Twitter (@ceddytrad) or LinkedIn, and be sure to share the article with friends and colleagues who might be interested!

In the market for legal translation services?

Looking for a French-English legal translation specialist to translate your legal documents? Look no further. Contact me today for a free quote.